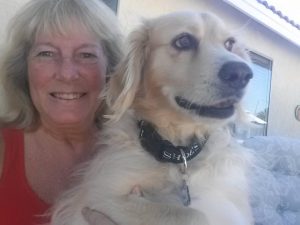 Sherwood Anders has been an animal lover her entire life. She got her first dog when she was a year old, and rescued her first cat at age six. Growing up, she wanted to pursue a career as a veterinarian, but followed a path into advertising, marketing and fundraising instead. She and her husband Bob first visited the Riviera Maya in 1996, and returned in 2001 and discovered Akumal during a snorkel trip. It was love at first sight and they bought a condo there in 2003. Since 2007, they have been dividing their time between Akumal and California, driving over 3,000 miles each way with their dogs, whom they call Beachmutts. Sherwood had rescued a stray dog from her neighborhood in San Francisco, named Missy, and has adopted five beachmutts from the area – Mr. Cejas, Bella, Solavina, Mambo and Marysol – and four cats. She has also fostered numerous dogs and cats and kittens and even an iguana. She began volunteering with VIDAS in 2005 and has participated in numerous spay/neuter clinics, as well as with several animal organizations in the area, including escorting several dogs to the US to their forever homes. Sherwood’s love of animals, the Riviera Maya and her background in marketing and fundraisingare now combined to allow her to follow all of her passions at one time with Coco’s Animal Welfare. She and Bob currently share their homes with three beachmutts – Bella, Mambo and Marysol – and four junglecats – Miska, Juba, Peanut and Mango. Sherwood recently established BeachmuttS.org, a 501c3 non profit organization in California. Its mission is to raise awareness and education of animal welfare and care, assist animal rescue efforts in the US and Mexico, and work to combine the causes in the two countries.