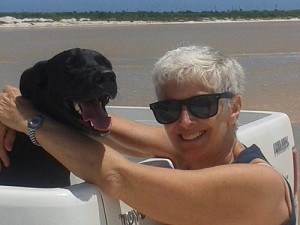 Lorraine Reynolds is originally from Montreal, Canada and is now enjoying life in the Riviera Maya with her husband, JP, five cats and two dogs.

After attending Pratt Institute in NYC as a Fine Arts major, Lorraine worked 35 years in the airline industry as a flight attendant for Air Canada. During those years she also represented her colleagues as a Union officer, in both elected and appointed positions. Along with flying duties, her Union responsibilities over the years included contract negotiations, arbitrations, seniority mergers and generally protecting the rights of individual coworkers.

Since her retirement in 2012, Lorraine has continued to use her acquired skills by volunteering at Cocos Animal Welfare, helping with fundraisers, feeding scores of visiting vets and volunteers, and promoting CAW to the community, all combined with a little salsa dancing for fun. She is now looking forward to contributing further to CAW having accepted a position on their Board of Directors. Lorraine can be found on Facebook or contacted through CAW at Lorraine@cocosanimalwelfare.org.